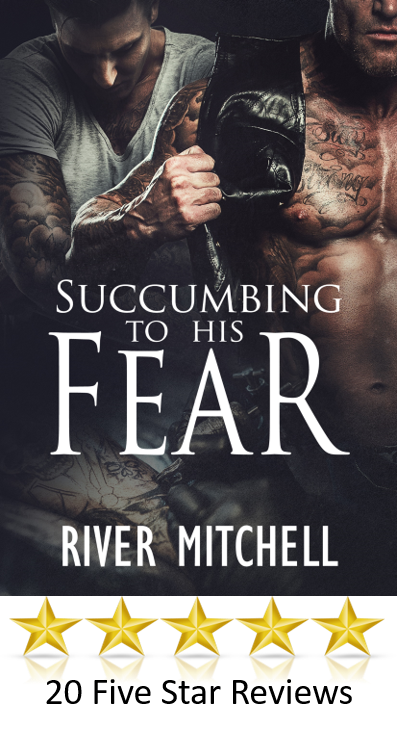 After a life changing event makes Alfie the legal guardian of his estranged half-siblings, as well as a chance meeting one drunken night, he finds his world turned upside down when he discovers that everything he thought he knew about himself was catastrophically wrong.

Before meeting Alfie and his family, Fear was content with his casual hookups and one-night stands, purposefully keeping everyone at an arm’s length. As Alfie comes into his burgeoning feelings, a curve ball shakes the two men, threatening to destroy Fear and his new found chance at happiness with Alfie.

With everything thrown into turmoil, Fear decides to fight for those he loves, Alfie and his family included. Will they be able to survive the collateral damage around them, or will they lose everything?

This book ends in an HEA and does not end on a cliffhanger.

I picked this one up on a whim because I am a sucker for the unexpected parent/guardian trope. There are not enough words to explain how happy I am I gave this one a try.

This book was all kinds of emotional and all kinds of over the top and all kinds of fun. The plot was far fetched but the way the story was presented, it totally worked for me and pulled me in. I had to know what was what and who was who and why things were happening as they were.

However, the plot was not even a blip on the radar compared to the way I fell in love with ALL of the characters. Fear and Alfie were the main couple but it was the entire cast and crew who captured my heart and this book would not have been what it was if one character had been left out or had been created differently. Gamma Sheri was my favorite! That takes talent for an author to so completely create a world that every element was perfectly formed and perfectly carried out. I have never heard of or read anything by this author, but I MUST correct this deficiency right away.

Fear and Alfie’s romance was fraught with trouble from the very start. Both men were broken in their own way but each man completely the other in such a way that the troubles they encountered were meaningless in their journey to love. And there love was FAST and intense and I loved it right along with them. I am usually skeptical of instant anything but I was all for this romance and I enjoyed every moment of my reading experience.

I know this review is all over the place but I was just so surprised and pleased with this story I just want to tell everyone to read it for themselves so they can share in my fangirling love! I CANNOT WAIT for Talon and Tate’s story! I need it NOW!!!!

Life can change in an instant. One minute I was an average twenty-four-year-old. Going to work, hanging out with friends, and doing what typical twenty-somethings do. Then, late one Thursday night, I received a phone call and was completely blindsided, my life flipped upside down.

My father, the great and wonderful Alfred McKenzie, Senior, only stuck around until I was the ripe old age of five. At that point, the bright lights and the lure of reaping a fortune became too much for him to resist, so off he went, never to be seen again. I got an odd birthday card or phone call over the years, but I don’t think either of us tried very hard to keep in contact. Maybe it would’ve been different if Mum hadn’t taken me back to London with her, but deep down, I don’t believe he would’ve made any more of an effort if I had lived next door. The idea of him going to the trouble of jumping on a plane and traveling to a different continent to visit me was clearly out of the question.

You’d think that nineteen years would be long enough for me to have let go of any Daddy issues that I might have been holding onto, but when I heard the news that my father had been killed in a car accident, the grief was immediate. I felt as if I’d been punched in the gut. My first thought was that I would never have the opportunity to get to know the man who’d donated his sperm to create me. It shocked the shit out of me how much it actually hurt. What made that pain worse was that he had a wife and two kids who I knew nothing about. A whole new family, which he didn’t feel that I was good enough to be a part of, or even know.

To say that I didn’t cope very well when I found out would be a radical understatement. The culmination of the revelations hit me like a sledgehammer and I suffered a mini breakdown. Or, as my mother would say, I had an Alfie Attack.

I’ve suffered from panic attacks for most of my life. They varied in severity from causing difficulty in breathing to withdrawing into myself and shutting everyone out. They began when I was in an accident when I was eight and a drunk driver ran a red light, smashing into my mum’s car and two others. The multiple therapists who I was sent to after the attacks started diagnosed me with an anxiety disorder that manifests in a number of delightful ways. The attacks were triggered when I felt a loss of control.

Okay, so when I said I was an average twenty-four-year-old it may have been wishful thinking on my part.

Most of the time I can control my condition well enough to hide it. Only my best friend Eddie, Mum and Mum’s husband, Ben, know how much I’ve struggled. Finding out just how far out of control my life was after Dad’s death sent me into a tailspin of loss, anger, and a ton of fear.

The latter came from the knowledge that my two siblings, who I had only just learned existed, were currently in the care of the state, awaiting my arrival and their subsequent rescue. Seemed that Daddy fucking dearest left a stipulation in his will that if anything were to happen to him and his wife, he wanted me to take custody of the children. This from the man who couldn’t even tell me I had a brother and sister. I mean, would it really have been out of the question to give a guy a heads up? A letter, smoke signals, a phone call saying, “I know you haven’t heard from me since you were a child, but do me a solid and look after the kids I chose to hang around for if my wife and I pop our clogs.” Nothing!

Even my mother, the queen of crazy town, was taken aback by what Dad and his wife, Claire, had done. It all made sense upon finding out I wasn’t chosen because of any family bond or love he felt toward me. I was simply the only choice. Neither Claire nor Alfred, Senior had any other relatives they considered worthy. The warm and fuzzy feelings that news gave me lasted all of a second.

The anger that followed quickly on their warm, fuzzy heels was so strong; I actually thought my head would explode. I mean, who does that? He couldn’t be bothered to tell me about my siblings, but expected me to raise them. If I had the chance to see him again, my first order of business would be to smash his face in.

Yes, I was 24, and technically an adult, but being a pseudo-dad to my long-lost siblings was not something I was ready for.

When I thought things couldn’t get worse—yes, there was more. It was also stipulated in the will that the children were to remain in the States. I was expected to move, and remain there until both children finished their high school educations. I, of course, had the right to decline the request, but that would force the children to remain in the custody of the state and risk being split up. Both my mother and I hated the thought of that; none of what was happening was their fault.

Not only had they lost both parents, but they were somewhere that I was sure was scary. Did they even know what was happening? They were facing the possibility of being separated from the only other person they had left in the world, excluding me. It wasn’t even clear from the will if they knew about me.

After about a million talks with both Mum and Ben, we decided that we’d all go to America. Milford, Pennsylvania, to be precise, and see if this was something that I could even attempt to take on.